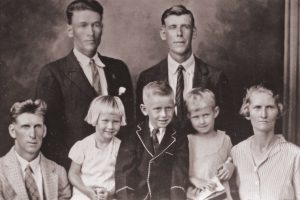 Two brothers, Donald and Jannetas (Jock) MacKay were going to immigrate to Canada, but two of their friends and neighbours from Scotland, Alex and Donald Matheson were heading to Australia and talked the two brothers into joining them.

Donald was born in May 1901 and Jannetas in June 1902, in Rogart, Sutherlandshire, Scotland to James MacKay and Isabella Sutherland. They attended a country school at Rhilochan about a mile south of their farm at 228 Tannachy as did their 11 brothers and sisters. Leaving school at the age of 14, the boys worked with their father as a road contractor and on their 15-acre property, near Rogart where they grazed Cheviot sheep and black-faced cattle. They grew their own potatoes, turnips and other vegetables.

Donald and Jock helped build a two storey granite house which had only just been completed when the young men, now in their early 20s, made the decision to immigrate to Australia.

It had been snowing heavily and the family walked through deep snow to say their goodbyes as the train left for London. It was early in the morning when their ship, the SS Largs Bay sailed from the London docks with 147 immigrants on board. The trip took 28 days and arrived in Fremantle, Western Australia, on the 4th April 1924.

The two men and their shipmates made their way to the YMCA in Perth, where employment agents from the New Settler’s League, would come and offer them work. The single men were to take jobs in rural areas to relieve the labour shortage on the farms. Donald and Jock caught a train to Northampton, then went by the road mail, a horse and buggy out to Cannon’s property at Nabawa, their first job in Australia.

They share farmed with Rupert Ash, clearing land and cropping for two years, making a good return. It was during this time that Donald met Sarah Thomas, daughter of Daniel Thomas and Maria Mansell. They married in Geraldton on the 24th of June 1930.

After their marriage, Donald and Sarah lived for a time at Billy Bridgeman’s, share farming until they purchased a property from the Williamson’s at Dindaloa near Nabawa which Donald and Jock named, Rogart after their hometown in Scotland.

Jock never married but continued to work on the property with his brother until he enlisted in the army in the army in 1941 and served in Papua New Guinea (PNG) during WWII. On his return, he worked for a time for his brother in law Reg Jupp before retiring in Geraldton.

Donald and Sarah had five children, James, Janet, Nancy, Angus and Robert. The property was expanded when they bought land from Archie Jupp. It was in the early 1950s when Donald’s health began to suffer and the family moved into Geraldton, leasing the property. Donald passed away on the 13th October 1959 at the age of 58. Jock was 91 when he passed away on the 19th August 1993.

In later years the original portion of Rogart farm was sold to Mazzucchelli’s and Angus currently lives on the property with his wife Dianne.

Note: Donald Angus MacKay and Alexander George MacKay arrived per Ormonde 1 April 1924. Both brothers enlisted in WW2 and Donald was taken as a POW and died of illness while working on the Burma railway, 10 March 1944. Alexander died in 1971, unmarried.