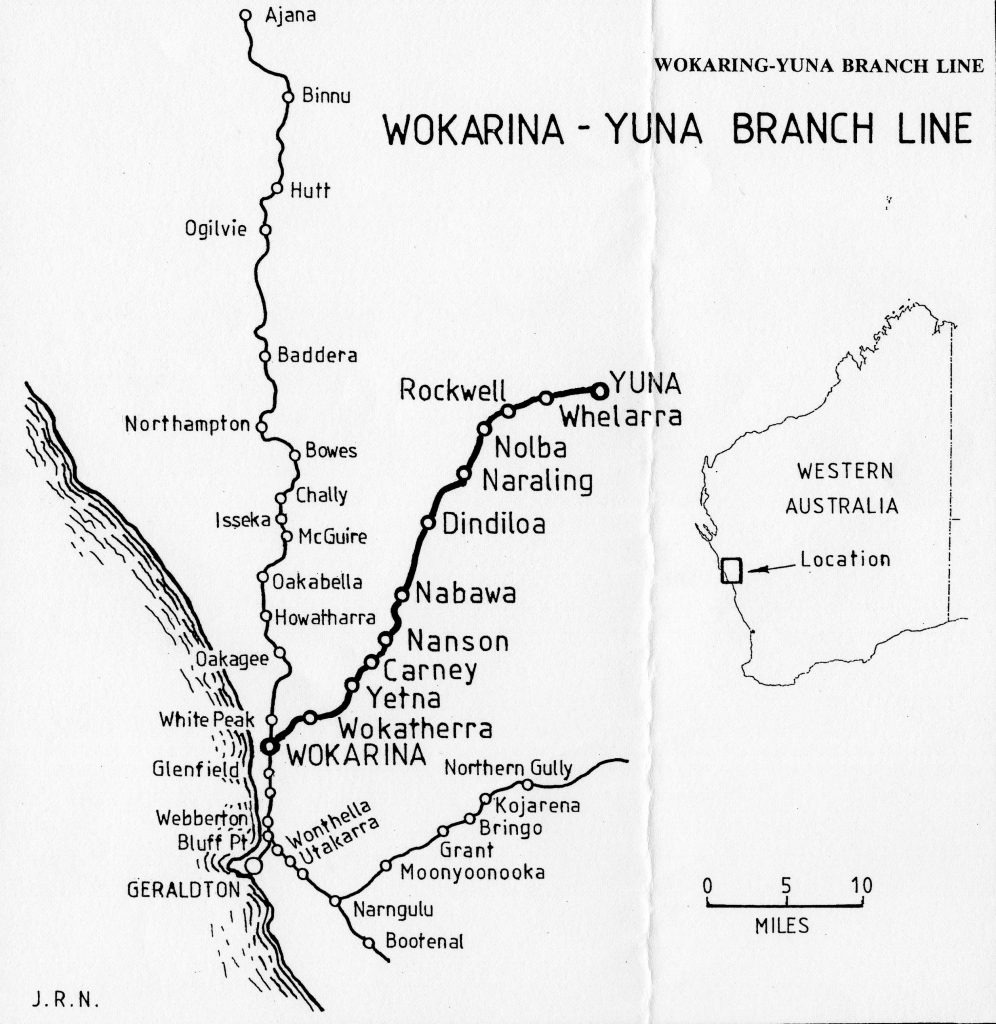 BEGINNING
The Wokarina to Yuna railway line was a branch of the Geraldton to Northampton line. Both lines were the result of the growing demand for services in the development of the Midwest region of the state. Reports from explorers about significant tracts of grazing land and the discovery of both coal and lead ore brought settlers into the area. The need for a town and port to serve this growth saw the town of Geraldton proclaimed in 1850.

GERALDTON TO NORTHAMPTON RAILWAY 1879
Geraldton was the hub for the surrounding districts as the commercial centre and port. The discovery and development of lead mines in the Murchison area led to pressure for a railway north from the port. Finally, after many hold-ups, the line to Northampton was officially opened in July 1879. It was the first government railway line to be built in Western Australia.

WOKARINA TO NARALING RAILWAY LINE
The Upper Chapman district, north east of Geraldton from 1850 to 1904 consisted of five vast pastoral leases. The passing of the Agricultural Purchase Land Act (1896) to divide large tracts of such land into smaller freehold properties led to one of these five leases being sub-divided. In 1904 the government purchased 56,400 acres of Mt Erin Station for subdivision into small farms. By 1909 all blocks had been sold and with the population increasing came a growing demand for services including a railway line.

The Northampton line was not able to adequately serve the growing needs of the settlers in the Upper Chapman. By 1906 farmers were experimenting with superphosphate and receiving strong demands for angora goats. The district needed its own railway line. After debate about the route for the line a government survey decided that the Upper Chapman would start at White Peak, traverse the Chapman Valley and terminate on the verge of Yuna country, a distance of 32 miles. The land was described as splendid wheat growing land supporting over one hundred settlers, also several orchards and the Chapman Experimental Farm.

The new line, as a branch of the Geraldton/Northampton line, would have its junction at Wokarina, south of White Peak. Tenders for the new line were called in July, 1909. The lowest tender was accepted in August, with the task to be completed within ten months. The price was £30,778. Unlike the delays that had plagued the Northampton line the Upper Chapman line was completed on time with the official opening held on 8 October 1910.

From Geraldton to the junction at Wokarina was a distance of eight miles (12.8 kms). The 3’6” gauge used 45 lbs (20kgs) rails, on a ruling gradient of 1 in 40, and the line ran in a northeasterly direction following alongside the course of the Chapman River. The distance from Wokarina to the townsite at Naraling was 26 miles (42kms). A triangle was placed at Naraling and the stations along the line were equipped with the barest necessities (i.e. shed, siding and ramp).

THE OFFICIAL OPENING OF THE UPPER CHAPMAN RAILWAY
The official opening was a special event for the people of the Upper Chapman and elsewhere. An account in The Western Australian of Monday 10 October, described the trip from Geraldton.

At Geraldton and other stations on route the train picked up a large number of passengers, who swelled the group of many hundreds waiting at Naraling. At Nabawah, a little station on the new line, the train passed through a floral arch, and a brief halt was made while the school children sang the National Anthem. Immediately at arrival in Naraling the Governor took charge of the engine, and amidst enthusiastic cheering sent the train through the ribbon held across the line.

The Governor, Sir Gerald Strickland, spoke warmly about the importance of the occasion for the district declaring, “The great gathering around him including such a large number of ladies and children was a real prophecy of the future prosperity of the district.” It was a very special day, but not without incident however, for a local farmer, a Mr Drew, protested the new line by brandishing his shotgun at the train.

NARALING TO YUNA
It was not long before the line was extended a further 11 miles (17.7 kms) to Yuna. The new addition was officially opened in May 1912.

A sad footnote to building the new line occurred outside Naraling on 12 February 1912, when a ‘navvy’, Hugh Smillie, was killed. His brother and two others were injured. The men were eating their lunch under the shade offered by wagons of a goods train standing nearby. The train was uncoupled causing the wagons to shift, striking the men. A train took the body and injured men back to Geraldton that afternoon.

Yuna was, at first, a modest terminus standing at the edge of mallee country that the government wanted to open up to settlement. The terminus consisted of a single loop siding and a fork line in the scrub at the eastern end. The triangle was moved from Naraling to Yuna to enable the train to return to Geraldton.

THE JOURNEY FROM GERALDTON TO YUNA
The train started on the Northampton line, passing alongside the Indian Ocean eight miles to Wokarina. As the junction for the Yuna line, Wokarina was an important station and from 1913 a station master was permanently appointed there, with a house located nearby for his family. He was responsible for train attendance and to account for the major loadings of wheat, wool, sheep and produce coming down the Yuna line.

From Wokarina the train passed through the gap in the Moresby Range, dropping quickly into the Upper Chapman valley. It continued through undulating country with occasional stopping places for passengers, goods and mail for the local families. The major stations on the line, after Wokarina, were Nanson, Nabawa, Naraling and the terminus at Yuna.

Nanson was named after John Nanson, the local member of parliament. Just before reaching the stop at Nanson the train passed across one of two substantial wooden bridges on the line.The village here was to grow because of the close link to the new railway with shops, a bank, schools and churches opening to serve the community. It was for many years the centre for railway maintenance and home for the railway workers. Here CBH had a wheat bin near the siding with its stock races, a weighbridge, wool ramp and station shed.

The next stop was at Nabawa, the aboriginal word meaning “camp far away”. There was a wheat bin here, a standard shed, siding, wool ramp, weighbridge and stock races (built in 1921). There was a school, hall, church, a shop and hotel. Nabawa was a watering station with the tank down the line but after 1930 it was used less frequently when a tank at Yuna was established.

From Nabawa the line pushed across country, stopping at Protheroe when the lead mines were active, particularly during World War I and into the 1920’s. It was a township of over 100 people at its peak.The Protheroe stop was withdrawn in 1956.

The line then moved out into open plains stopping at Dindiloa where local business included wool, fat lambs and skins. Originally, bagged grain was taken from most sidings but the grain business later became centred at Nanson, Nabawa and Yuna after bulk handling commenced in the late 1930’s.

Naraling, the original terminus, was the next stop with a CBH bulk grain bin. It was declared a townsite in 1910. The railway encouraged settlement in the area and with the increase in population emerged a government school, shops including a blacksmith’s shop, a hall, plus tennis courts and an oval.

Yuna was the highest station on the line at 268 metres above sea level. Like all the other stations, Yuna was unattended and supervised by the station master at Wokarina. Barracks for the train crew were opened in 1924.

The coming of the line to Yuna helped open up the country for settlement. The land had begun to be cleared in 1908 with the surveying completed by 1910. The land was quickly taken up by settlers. Yuna soon was sending, grain, wool and sheep down the line and in the 1920’s clay was sent in open trucks bound for Subiaco and East Perth.

IMPACT OF THE LINE
In the early days of the line the train was for many people in the district the only means of transport. It provided a direct and regular link to the town of Geraldton. It significantly assisted in bringing more settlers to the district and in opening more distant land to agriculture. Wheat farming, in particular, prospered by this regular and reliable transportation to the port.

The railway also served to link the small communities closer together and provide opportunities for social activities including sports and picnics. Between 1914 and 1932 special Race Trains travelled to Nabawa to bring racegoers to the Narra Tarra racecourse, returning them home at the end of the day. Teachers sometimes took school students for a day tour into Geraldton, leaving on the diesel train in the morning to return later in the day, a special trip. The access by the train to Geraldton was very important.

THE TRAINS
The first trains to run on the Upper Chapman line were steam locomotives which, with their crew, were provided by the Geraldton Depot. The service consisted of two mixed (passenger and goods) per week and the trip was quite slow. A small refreshment stall at Nanson served welcome refreshments..

The introduction of the Governor Class diesel electric train in 1938 brought a significant change to the service. After the slow, steam-driven mixed trains there was now a much faster, more convenient service still remembered today with affection. In addition to carrying passengers the new service also carried mail, perishables and small van goods. People still remember the train stopping close to dwellings to put down or pick up passengers. One local recalls, “As a child I remember going to town on the train and many times the train driver would stop the train closer to our house just for us to get off.”

CLOSING THE RAILWAY
Over time, with improvements in road transport and more settlers buying their own vehicles, demand for the train service declined. By the mid 1950’s the Yuna line was running only on Fridays, making a double trip enabling passengers a same day return. A government review of short-haul lines listed rural lines for closure, including the Geraldton to Ajana line. This meant the end of the Yuna service. The line closed finally on 29 April 1957.

Some farmers in outlying areas sought to have the line reopened. In 1958 the Railways Royal Commissioners met with Yuna residents who largely supported the closure. In 1961 the line were formally closed and the lines taken up. Residents were eventually able to purchase parts of the track and sleepers were also pulled and used for farming purposes.

TODAY
There are few vestiges of the line left. Careful scrutiny from the road can still reveal signs of where this small, rural railway ran through the Valley.There are two weighbridges visible, one each at Nanson and Nabawa. The Railway Bridge at Nanson, over 100 years old, is still standing. The Upper Chapman Line played a major role in farming, mining, public transport, postal services and social life in the district.