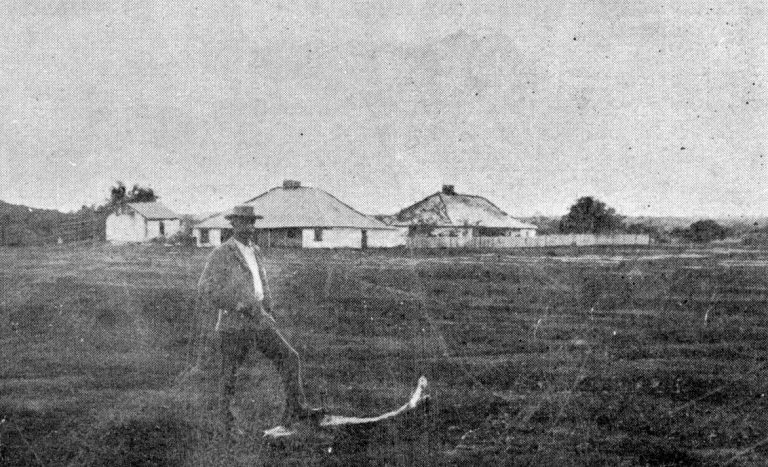 Michael Morrissey arrived at Fremantle on the “Ganges” in 1841, from Waterford, Ireland. He first took up work as a shepherd, near York, and, as was not uncommon in those days received sheep in lieu of wages.

In 1851, with financial assistance from George Shenton of Perth he took up a pastoral lease of 20,000 acres in what was then known as “Paradise Valley”. On a small tributary of the Chapman River, about 7 Kms south of a huge flat-topped hill which he called Mt Erin, Morrissey constructed outbuildings of stone and pise (rammed earth) and a home of brickbats. Mt Erin also included a private chapel and cemetery in what was known as `Cemetery Paddock’.

In 1850, after 10 years of separation, Morrissey brought his wife out from Ireland per the ship “Mary ”along with his brother William, nephew Patrick, and various members of his wife’s family, the Ryan’s of Waterford. When this source of labour dried up (he also employed ticket-of-leave men from Lynton) he nominated sons and daughters of his friends in Ireland.

Amongst those engaged to work on his estate was Michael Ronan who had charge of a consignment of blood horses imported from India by Morrissey.

With the help of his brother William, and his eldest sons, Michael Morrissey soon established himself as a successful pastoralist. Unable to read or write, he signed his leases with a cross and relied upon his wife, son and George Shenton to do his correspondence. Illiteracy didn’t prevent him and his family from expanding their holdings with leases on the Murchison, and beyond Tallering Peak to Yalgoo.

From time to time Morrissey was able to lease more land and so add to his acreage. Later when his sons Michael, John and Patrick had settled on stations of their own, his younger sons Maurice and Tom, with the help of hired labour, carried on at Mt Erin.

Joseph Cooper, from Birmingham, joined Morrissey in 1865 as a general station hand. He soon made a name for himself for his proficiency and expert bush-craft and, after some years, became general manager of Morrissey’s estates.

In 1880, son Maurice married Anna Mills in the Church of England, as a result, he was disinherited by his father. Within eighteen months Maurice became ill and died in the bush on his way for medical attention at the age of 28. Two years later, Tom married Emma Clinch. Michael Morrissey died in 1893 and the property was purchased by Forrest Emanuel.

In 1900, Hubert Lee Steere who was the third son of Sir James Lee Steere, Speaker of the Legislative Assembly in Western Australia for many years purchased Mt Erin. In 1904 the Government repurchased 56,840 acres of the station for the cost of 9,185 pounds with the intention of subdividing the land. Of this land, 2,069 acres were set aside for a native reserve and roads. By 1909 all the remainder had been taken up as small farms of 7-800 acres. These lots were sold for 2/9 d per acre on condition that the owner settled and worked their farm. Homestead blocks were granted free provided a dwelling was built on it. The station homesteads in each case retained a portion of the land surrounding the homestead, these being taken over for farming operations.

In 1905, James Meehan purchased the property containing the Mt Erin homestead and he carried out a good deal of contract chaff cutting for the new settlers, using a steam plant. He stayed at Mt Erin until 1912 when Messrs. Ron Owen and Len Beit from the Eastern States took over. They came to Mt Erin as single men and soon realised they and their employees would have to work hard and long hours. Many local men were employed by Owen & Beit. Amongst these were the Bunter brothers, Buckley & Speedy brothers, Bill Forbes, Sam Dutton, Algy Pearce and Bill Bowen. During the days of Owen & Beit at Mt Erin, the property retained the distinctive appearance of a pioneer station, with numerous buildings, large numbers of cattle, sheep and horses, with an imposing boundary fence of 8 wires. A considerable number of men were employed and the domestic staff was fairly large also.

The farming partnership was discontinued in 1921, Len Biet moved to Armadale and Owen went for a trip to NSW and while there broke his leg badly. When he returned to Mt Erin he found that his injury was a handicap to his farm work. He took in sharefarmers. Firstly the Scully brothers and then Bill Gould. The Gould family lived in the homestead until the end of 1924.

Mrs. A.E. Thomas of Moonyoonooka purchased Mt Erin early in 1925, she also who owned a farm “Cootaberri” at Moonyoonooka. Her husband George had died in 1922 and she took over Mt Erin with her family of George, Connie, Norah and Doreen. They farmed the two properties in conjunction even though they were 17 miles apart. They were the first owners to have a tractor on Mt Erin and work a day and night shift. Mrs Thomas owned Mt Erin for 20 years. For a considerable period during her ownership she leased the property to other people. Amongst those were Mr & Mrs Theo Hodge in 1929, Mr & Mrs D.B.A King 1932-35, Mr & Mrs Jim Smith 1937 –39, Arthur Tetlow of Nabawa share farmed in 1940 and leased from 1941 to 1945.

Mick Gannon of Gannon’s Dairy from Geraldton bought the property in 1946. Mick Gannon conducted the dairy from Mt Erin also laying the foundations for improved fencing, subdivision of large paddocks and the up grading of pasture. The dairy business was later closed down and concentration was given to wheat and other cereal crops. Mick Gannon sold Mt Erin and bought a property at Northern Gully where he shifted his family to in early 1951.

Bill Meehan the son of the James Meehan who had purchased it when it was first thrown open for selection had the property for a short period during 1951.
Bill & Margo Scott from Mooloo Downs Station in the Carnarvon district bought Mt Erin in 1951. They carried on the projects started by Mick Gannon and using modern methods brought the property to a highly productive level. The Scott family sold in 1964 and moved to properties in Esperance. 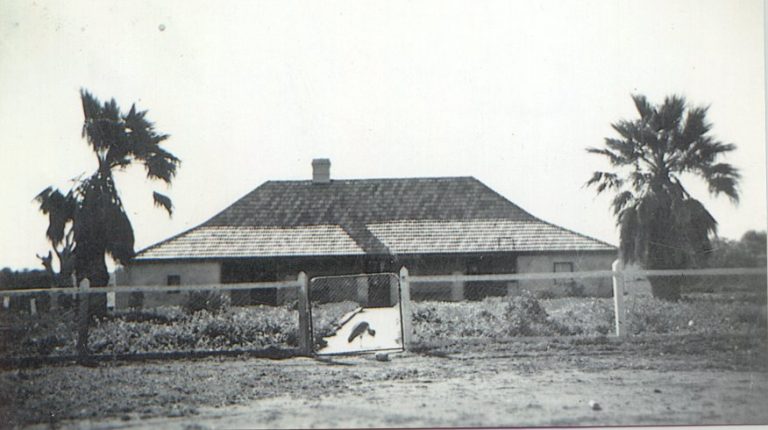