Nanson is a small town in the Mid West region of Western Australia, 30klms northeast of Geraldton and situated on the banks of the Chapman River in the Shire of Chapman Valley, previously known as the Upper Chapman.

In 1904, Michael Morrissey’s estate Mount Erin, was subdivided and Nanson became the district’s first gazetted townsite. The town was named after John L Nanson, MLA, Member for Greenough who had been a keen advocate for closer settlement in this district.

The railway opened in 1910 and operated until 1957. The old wooden railway bridge which can be seen to the west of the Geraldton-Yuna Road is where the line crossed the Mount Erin Creek.

Nanson was the centre for railway maintenance and home to gangers and their families. Besides the siding, there was quite a large railway yard and buildings to house work trolleys and maintenance equipment, goods shed, weighbridge and wheat silos.

A Post Office was established, first by Bill and Rose Stansfield. Stores opened and by 1913 a government school had been established.

Nanson became the centre for local government with the construction of the Roads Board Office in 1913.

During it’s time there was a butchery, bakery and general store. Tennis, Cricket, Golf, a Race Course, Football and Hockey fields along with a State School and a Catholic Convent. However only the Anglican and Catholic churches have stood the test of time.

A request was received by the Education Department in 1912 for a school to be established at Nanson.
The contract to build the school at a cost of £175/2/6 was let to D Maeer and was opened in May 1913. The first teacher was Mr Harold Christie.

In the early 1920s a committee was formed to build a hall as a tribute to the World War I soldiers.

Thirteen local residents invested £50 each. Public subscription raised money to furnish the hall and five acres of land was acquired from Michael McDonnell.

Built in 1924 the Memorial Hall was opened at the end of January 1925 in what was called a Grand Affair.

The Geraldton Express reported that a band from Geraldton played popular selections during the afternoon. The official opening by Mr JW Hickey, MLC, took place at 4pm. Mr MJ Kennedy, MLA, said he hoped that the hall would never have to be enlarged in memory of others whose lives will have been given for the same cause, and that future world differences would be settled by the statesmen around conference tables.

A sports program was held during the afternoon. In the evening a large crowd assembled at the hall for a dance with music supplied by Mr L Forrester.

The 60-foot by 40-foot hall was of iron and wood and had a 12-foot stage. Built by Mr Silverlock of Geraldton, the cost was £650. The acetylene (carbide) gas lighting was powerful and also windproof but, as PA McDonnell recalled many years later, it was somewhat of a hazard when the interior was decorated with streamers for special occasions! In 1929 an electric plant was installed.

Over the years the Nanson Memorial Hall became a centre for social activities and was used for various functions including dances, concerts, travelling vaudeville shows, picture shows, wedding receptions, church services, meetings of all sorts and even boxing tournaments. St Patrick’s Day sports carnivals were held on the surrounding sports ground.

In 1969 the Nanson Hall was sold to the Brothers of St Patrick’s College Geraldton where it was re-erected in 1970.

Names of the Fallen Soldiers of the Upper Chapman can be seen here.

In the Geraldton Guardian of the 16th January 1927, the Nanson News column refers to the Popular Girl Competition held in Nanson to raise money to build a hall. The competition proved to be a great success with £109 raised.

Each girl was presented with a brush and comb and many flattering speeches were made by the members of the hall committee.

The presentation of the sash was made on the same night as a linen and kitchen tea that was given to Misses Bessie McDonnell and Mollie Murphy, who were to be married the following month.

Bessie McDonnell is the sister of Austin McDonnell who wrote the book, Chapman Valley Pioneers. Bessie married Edward Browning in 1927 and they had five children, Mary, Joan, Alfred, Teresa and Robert.

The sash was left to Bessie’s daughter Joan when she passed away and the family have very kindly donated it to the Chapman Valley Heritage Centre.

Just about two years ago some of the residents of Durawah, Yetna, Mt. Erin and Nanson decided on erecting a hall to the memory of fallen soldiers, and a fine structure was built at Nanson, which was considered a central place for the hall. Before the hall was erected Nanson was a very dull little township, but such days are over, and as it is such a popular hall, crowds attend the gatherings. For dancing it is one of the best, the floor being kept in excellent order, and the music is excellent, the beautiful player piano, so rich in tone, and the fine jazz band making dancing very enjoyable. The popular girl competition held on Saturday, January 8 proved a great success, £109 being taken. Miss Bessie McDonnell came out the winner, Miss Irene Bunter second, and Miss Mollie Murphy third. There were just a few votes more for the first girl, and it was one of the closest competitions ever held in the district. On Saturday there was a presentation made to the three popular girls, and on the same night, a linen and kitchen tea was given to Misses B. McDonnell and Mollie Murphy, who arc to be married next month.

On Saturday, January 22 the annual sports gathering will be held, when there will be fun for all. Afternoon tea will be provided, also a set tea in the evening, for which the charges will be moderate, and a fine dance will be held at night. The Christmas Tree held for the kiddies was a glorious sight, but Santa Claus soon stripped it of its load of gifts, every child getting a beautiful toy.

The bachelors of Nanson are holding a ball early in February. It is understood Sid Cameron’s band from Geraldton is to supply the music, and Mrs. Marshall has the catering. Dressmakers are busy preparing the elegant gowns that are to be worn, and gilt-edged invitations are being issued, no one being admitted without one of these cards. On this occasion, the kiddies take a back seat, something new for Nanson.

The Church of Our Lady of Fatima, designed by Monsignor John Hawes, was built in 1938 and opened by Dr J P O’Collins, then Bishop of Geraldton.

The Anglican Church of St Luke, was built of local stone by Mr Fred Murphy. This church, which is just south of Nanson, was opened by the Right Rev John Frewer in February 1953.

After much hard work by the parishioners, the loan from the church authorities in Perth was finally paid and St Luke’s was consecrated on Sunday, April 19th 1964.

Further history of the churches in the Shire of Chapman Valley can be found here.

These days the Roads Board building has been restored and is in the grounds the Chapman Valley Heritage Centre which displays machinery, household items and photographic evidence of a once thriving district. A few of the houses have been lovingly preserved and it has a village atmosphere. The district Golf Club and Showgrounds are just north of Nanson. 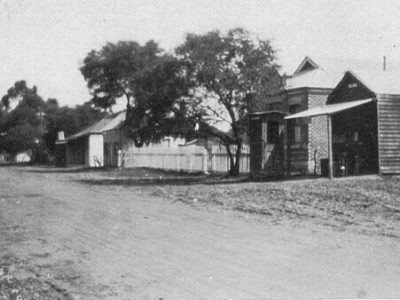 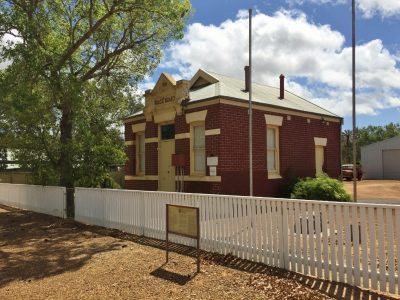 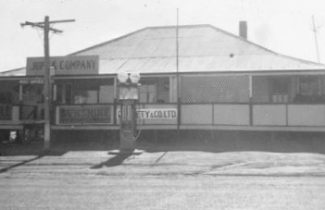 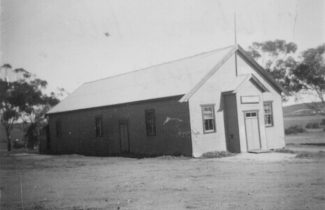 Nabawa is the main centre of the Shire of Chapman Valley, and where a new Shire Office was built in 1967… 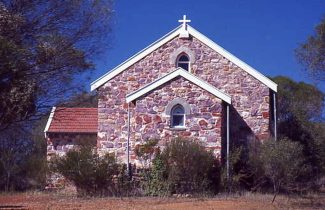 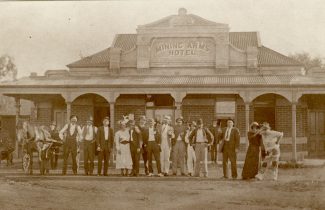