The ‘Shearing Mural’ was unveiled at the Chapman Valley Historical Society Heritage Centre on the 4th September 2019. A community grant was obtained from the Geraldton Community Bank branch of Bendigo Bank which provided financial assistance for the project. The artists Jane Barndon from Figments & Glimpses and Cam Fitzgerald created the shearing themed mural to be opened in time for the 70th Chapman Valley Annual Show.

The mural made up of three 2m by 2m panels, captures the essence of the Chapman Valley story and compliments the current shearing display. Each panel depicts a different snapshot of the shearing story with a dog leaping over a fence as it herds sheep; a man shearing a sheep with hand shears and the shorn sheep return to the fields with the iconic Moresby Ranges in the background.

Artist Jane Barndon’s father-in-law was a shearer and passed away last year, he is the shearer in the painting, keeping a tally of how many sheep he’s sheared.

The Chapman Valley Historical Society were elated to receive a Commendation Certificate and Medallion at a function held at the Old Fremantle Goal, to announce the winners of the State Heritage Awards on the 29th March 2019.

Comment attributed to Heritage Minister David Templeman at the Awards Evening:
“I congratulate the 20 Western Australian heritage champions for their remarkable contribution to preserving our State’s highly-valued heritage.”

The submission for a Heritage Award was submitted by the CEO of the Shire of Chapman Valley early in December 2018 and announcement of the finalist was at the end of February 2019. The Society was one of five finalists in the Community-based Organisations Category.

The Chapman Valley Historical Society became incorporated in 1985, establishing a Public Museum at Nanson in 1996. The museum provides a place of knowledge, ideas, stories and memories. The development of the Museum over the last 23 years has been incredible and is managed by volunteers, with the support of the Shire of Chapman Valley. It is a community resource to inspire, educate and inform, both the community and visitors, and to contribute to the conservation of the history and heritage of the district of Chapman Valley.

There is a broad range of displays from farming equipment and vehicles, to family histories, photos of pioneers, wedding photos and household items. The museum displays depict the paradigm of historical life in all elements. The Chapman Valley Historical Society is the leader in cultural heritage in the Chapman Valley district. 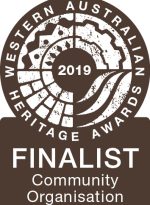 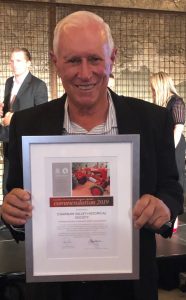 The iconic Upper Chapman Road Board building, officially opened in 1913, is the only heritage listed building in the Shire of Chapman Valley. In 1995, after many years of tirelessly working to have the building heritage listed, the group were rewarded and achieved their goal. By the following year the Society had sourced themselves a shed and were working towards establishing a museum on the reserve land vested in the Shire of Chapman Valley. The first shed was erected on the site of the first workshop of the Upper Chapman Road Board. The Museum was officially opened in 1998.

The growth of the Chapman Valley Historical Society Museum has been amazing. Volunteers manage six sheds housing thousands of donations and the iconic Upper Chapman Road Board building. Past and present members of the Society have always had the passion, dedication and drive to develop the Heritage Precinct to what it is today. Members have embraced and initiated new projects, increasing the size of the Museum and public appeal.

Success at the Chapman Valley Museum is measured through the comments of the visitors that enjoy the museum experience each year. The addition of the WWI Fallen Soldiers project in the grounds of the Heritage Precinct, was officially opened in 2017 and was an extremely rewarding project. 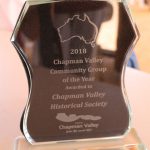 The Chapman Valley Historical Society was awarded the Shire of Chapman Valley Community Group Award as part of the Shire’s Australia Day celebrations.  The presentation of the award was due largely to the success of the WWI Upper Chapman Fallen Soldiers Tribute project and the very moving official opening. It also recognised the contribution the volunteers make to the success of the museum in Nanson.

The Upper Chapman WWI Fallen Soldiers Tribute recognises the 42 soldiers that enlisted from the district and sadly did not return to Australian soil.  The research for this project involved hundreds of volunteer hours.

The research started with the names inscribed on the War Memorial in Nabawa; with only the initials and surnames, the possibility of a misspelling added to the challenge.

Names from Honour Boards in the district and church records were researched.  It was found that there were six more soldiers who paid the ultimate sacrifice and had not been listed on the War Memorial. 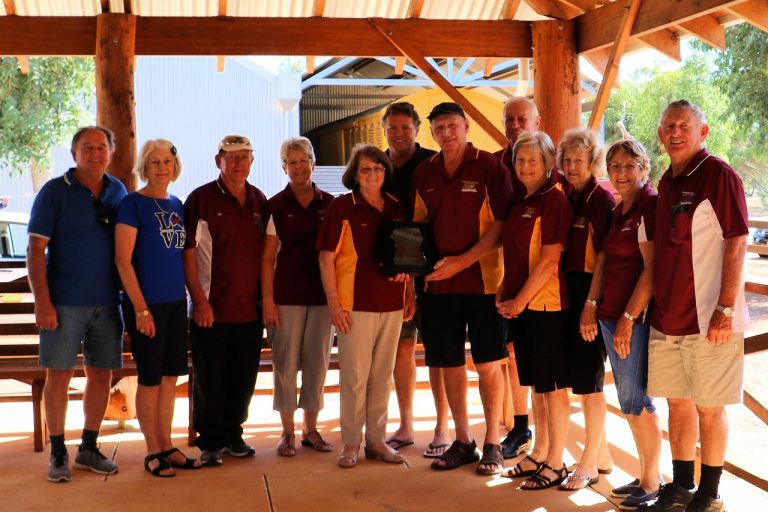 The Chapman Valley Historical Society are very grateful for the funds provided by Lotterywest, the assistance of the Shire of Chapman Valley throughout the planning of the project and the wonderful volunteers who gave so generously of their time during the two years that it took for this project to be realised. 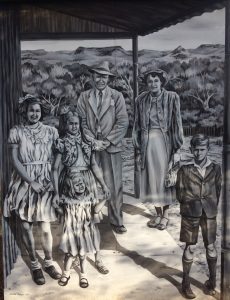 This mural is on the bus shelter off Chapman Valley Road near the museum at Nanson The painting, completed by artist, Marina Baker was commissioned by the Chapman Valley Shire in 2010. The photographic collection at the museum provided the foundation for mural.

The backdrop shows the hills of the valley and a bushy river track, while waiting at the bus stop are an adult couple, Syd Jupp and Connie Hipper along with a group of children. The little boy, dressed in his school uniform, was drawn from photos of former Nanson Primary School students, while the girls include Helen and Jessie Calder and Barbara Kupsch (now Sheilds).  Barbara is the Past-President of the Chapman Valley Historical Society. The shelter is located almost exactly where the first Nanson Show was held in 1950.