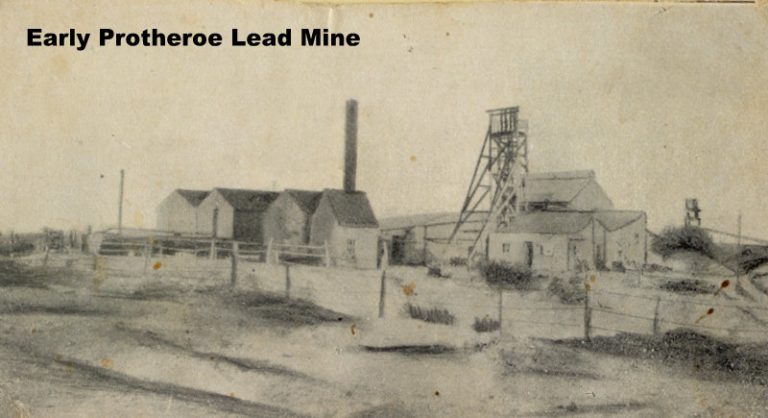 Copper was first mined at Narra Tarra (meaning ‘hill camp’) on Michael Morrisey’s Mt Erin pastoral lease from 1863 to 1866. The decline in copper prices on the London Market resulted in the abrupt curtailment of copper mining and encouraged lead mining in the early 1870s. A group of Melbourne businessmen floated a company the ‘Fremantle-Champion Bay Mining Company’ which leased a number of mines in the Northampton Mineral Field. These mines were coordinated under general manager Mr Ingleton and Mr Gray (John Benjamin Gray, a Parkhurst Boy) who had no formal training.

A smelter was built at the site in 1873 with the only other smelter at that time located at the Geraldine Mine. Between 1870 and 1879 copper and lead valued at over £60,000 was extracted from the mine. When falling prices made it uneconomical, the mine closed and a number of the miners settled in the area.

Low prices meant there was no mining on the field from 1892 to 1897. From 1897 to 1902 the WA Smelting Company of Fremantle acquired the leases of four lead mines in the Field, including Narra Tarra, for the purpose of smelting telluride ore from Kalgoorlie. After spending a considerable sum of money on de-watering as well as various developments and improvements on the site, the general manager Mr Kohler, reported poor results. With the treatment of telluride ore becoming increasingly unprofitable, the company went into liquidation in 1902.
(Palmer, E.S. 1986, “The Lead and Copper Mines at Narra Tarra, near Nabawa”, notes held my Mr J. Cooper).

The Narra Tarra Mine still leased by the Fremantle Trading Company came back into production with the outbreak of World War I as the price of lead began to rise significantly. It was at this stage that the mine began to be referred to as ‘Protheroe’. To start production the mine manager recruited 90 men who worked in shifts from midnight Sunday to midnight Saturday. In the later stages of the war, a temporary closure of the mine was necessary. Regardless of the closure period, output from the mine reached a peak of 460,000 pounds worth of lead and copper between 1914 and 1925, exceeding that of the rest of the Mineral Field put together in the 65 years to 1910.
(Kelly, G.J. 1962, “A History of Mining in the Geraldton District”, Early Days, Vol 6, No 1, p91).

To cater for the mine’s workforce a township, Protheroe, was established. The company built a fine house for the general manager, Mr Sutherland, and a row of four cottages and offices, one of which was occupied by the mine manager, Mr Jenkins. In addition there were other cottages for families, a row of dwellings for single men, a store, a government school and a boarding house which provided meals for the single men. Electric light was supplied from the mine. There was also said to be a pre-existing cemetery, however when the townsite was surveyed prior to being gazetted there was no trace of an old cemetery found.

The company began having financial problems as a result of mismanagement and the inability to compete with European smelters. In 1925 the company went into liquidation and its assets were foreclosed by the Commonwealth Bank.

From 1926 onwards lead prices fell to pre-war levels and the Narra Tarra Mine lay idle. In 1946 Danish born Jules Heinsen revived the Narra Tarra Mine concentrating his efforts on what was called ‘The Gap’ at the northern end of the middle lode. Gerald Jupp was living in the old general manager’s house at the time, so Heinsen built himself a home nearby with hessian lined walls. Jules was often joined at the mine site by his brother Harry, who later bought the Nabawa Hotel (formerly the Mining Arms Hotel). Jules had some success at the site discovering a rich 4ft wide lode of galena (lead ore). His success was soon noticed by mining companies and in 1950 the Anglo-Westralian Mining Company obtained the lease of the Narra Tarra Mine for a reported 150,000 pounds.
(Kelly, G.J.1962, p95).
(Source: Palmer, E.S. 1986, “The Lead and Copper Mines at Narra Tarra, near Nabawa“, Notes held by Mr Joseph Cooper).

In 1950 the Anglo-Westralian Mining Company commenced operations at the Narra Tarra Mine which was now known as the Protheroe Mine, with Mr Plastow as the manager. In 1951-52 the mine was a contributor to very large shipments of lead leaving the port in Geraldton. The company introduced the flotation process to further concentrate the ore and except for a short break in 1953, lead was extracted until 1958 when operations ceased and the machinery was removed. At the time of closing the mine was 300 feet deep and miners were pumping out 15,000 gallons of water per hour.
(Source – Mr Digger Cooper).

Following the mines closure a large area of land surrounding the Protheroe Townsite was sold off to local farmers
(Kelly, G.J. 1962, “A History of Mining in the Geraldton District“, Early Days, Vol 6, No 1, p95).

Since that time only a couple of unsuccessful attempts have been made to open up flooded shafts, but nevertheless, during its lifetime the Narra Tarra Mine has proved to be the richest and most productive lead mine in the Northampton Mineral Field.

The Narra Tarra lead mine played an important role in the development of the Chapman Valley district. Many of the workforce being Ticket of Leave men hired from the depot at Champion Bay (Geraldton).

Further information is available at the Chapman Valley Museum at Nanson.