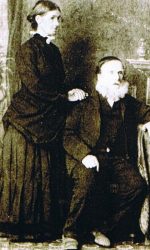 George Wells, convict number 4103, was sentenced in Nottingham for stealing wood. He was transported and arrived in Fremantle, Western Australia 7th September 1852 on board the convict ship Runnymede. On the 12th November 1856, he was transferred to Champion Bay then on to Port Gregory. Once he had earnt his Ticket of Leave in 1857, George could procure his own employment, reporting to the authorities at regular intervals. He worked as a shepherd for William Burges, on “The Bowes” station. It so happened, that Burges was the Resident Magistrate, so no doubt reporting was not a significant chore for him. George was given a Conditional Pardon in July 1859 at Champion Bay (Geraldton).

In 1866, George married Annabella Cross (a servant at the Bowes) at Gwalla Church, near Northampton. Together they had 6 children, two died in infancy. Annabella, known as “Granny Wells”, was known for her midwifery services to the women of the district.

George leased 50 acres of land about 2 miles north west of Nabawa known as Jones’ Swamp or Wells’ Swamp where he established the first orchard in the district, growing fresh produce for the local community within the vicinity of the Narra Tarra Mine. On one side of the swamp is a small mud brick cottage, now roofless, where the Wells family made their home and where he died in 1900. George is buried at the Gwalla Cemetery in Northampton.