Mervan Heinrich was born at Eudunda, SA on the 15th September 1922.   He and his family drove across the Nullarbor to Western Australia in 1932 to take up farming at North Baandee.    At the age of 14 years he left school to work on his father’s farm.    It was during the war and he and his brother earned extra money by burning mallee roots and selling charcoal for the war appeal, and to supplement their income.

Later Merv met his wife Phyllis Bennett and they were married in February 1946.  Together they purchased a small property at North Baandee which they cleared, and farmed  wheat and sheep.    They had six children, 4 girls (Coral, Yvonne, Val and Julie) and 2 boys (Ross and Bruce) over the successful farming years at North Baandee.   By 1966 it was time for a sea change and they sold  out.

The family moved to Chapman Valley where they purchased an 1800 acre property from Jack Short at Yetna.  “Murphyl Farm” was named after their namesake, Merv and Phyllis. 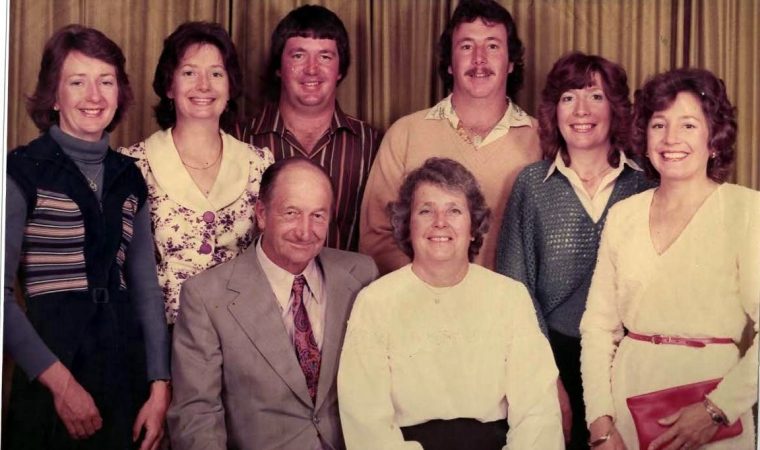 The farm was of good pastoral land for Angus cattle and merino sheep, as well as for cropping, but was not big enough to support the family.  Merv then expanded and purchased the adjoining property at White Peak, however, this was found to have the rare flora, acacia guinetii.  Unfortunately CALM banned the family from farming 810 ha of land for 10 years, which was a heavy loss of valuable land.  It was later found NOT to be a rare flora!   During those years the family turned to transport and purchased a prime mover and semi-trailer so they could do contract carting for general freight and stock to supplement their income.

Murphyl  Farm was renowned for farming tours and Farm Days during the Sunshine Festival.  Merv had a passion for tourism.  He conducted farm tours throughout the property taking visitors over the flat top hills to White Peak overlooking the magical coastline and the blue ocean.   Visitors had the experience of driving over the heritage listed Railway Bridge across the Chapman River and then they would have a picnic along the banks of the river.  Merv told the stories of life on the farm and demonstrated the art of shearing a sheep.  Meanwhile, Phyllis invited the visitors for a cuppa and a plate of homemade sandwiches and cakes, including her own lupin biscuits.

During Merv’s retirement years, the two boys Ross and Bruce continued to farm the property bringing in stud texel sheep, which they bred for the meat.   The boys later ventured into horticulture, growing pumpkins and squash.   They also built tunnels for growing bougainvilleas which were mainly sold for the local market in Geraldton and was a successful business for a few years.