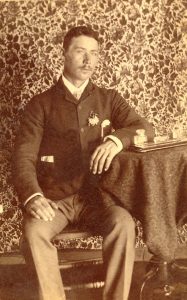 John ‘Benjamin’ Gray, number 12456, was convicted at Perth, Scotland, April 1847 for theft. He was 15 years of age when he was imprisoned at Dundee and sentenced to 7 years transportation On the 29th April 1847, John was sent to Millbank Prison in London and 3 months later was transferred to the Parkhurst Prison on the Isle of Wight where he waited to be transported. While he was in prison, John trained to be a tailor. It was another 2 years, on the 24th October 1849, when he sailed per Mary arriving in Western Australia as a Parkhurst Boy.
John was assigned to Thomas Mortimer who noted John progressed and reportedly ‘improved’ and was ‘doing well’.
John married Mary Petty at the Wesleyan Chapel in Perth on the 17th September 1858 and had 7 children. Edward Maitland b.1859 married Ellen Jane Murphy; David Alexander b.1861 married Susannah Bunter; Emily Jane b.1863 married Joseph Cooper (expiree); Isabella Mary Elizabeth b.1865; Fanny b.1867; Alice Margaret b.1870 married Richard John Boylan and Annie Letitia (Lettie) b.1872 married Joseph Frederick Hanlon. Isabella and Fanny both died in infancy and are buried at Greenough.
The family first settled at Greenough, employing 2 Ticket of Leave men in 1865 and 1866 and moved to the Narra Tarra Mine about 1870. Although he had no mining experience, John (Benjamin) went on to become the mine manager at the Protheroe (Narra Tarra) lead mine near Nabawa.
John died on the 9th September 1879 at the age of 46 and Mary died in 1881 at the mine aged 40, leaving 5 children aged 6 –22 years of age. They are buried at the Urch Street Cemetery now known as Apex Park.