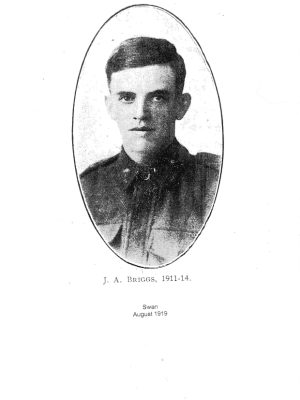 War Service: John, (Jack) enlisted 11 Sep 1915 at Blackboy Hill, WA, aged 20 years 6 months. He embarked 17 Dec 1915 per HMAT Ajana from Fremantle, WA and joined his battalion at Tel-el-Kebir, Egypt 07 Mar 1916. He sailed to Alexandria, Egypt 01 Jun 1916 per HMT Canada to join the British Expeditionary Forces and disembarked at Marseilles, France 09 Jun 1916. From 08 August to 05 September 1916, the Australians advanced on Mouquet Farm, however none of the Australian divisions could secure the farm. By the time the Australian Corps was withdrawn and replaced by Canadian troops, they had lost 23,000 men in six weeks, over half of the Australian infantry had been killed or wounded. Jack was reported missing 12 Aug 1916. A court of inquiry was held 04 Apr 1917 and found that Jack who was previously reported as missing in action at the Battle of Mouquet Farm, was now confirmed killed.
Killed in Action: 12 Aug 1916 at Mouquet Farm, Pozières, France, aged 21 years.
Cemetery: AIF Burial  round, Grass Lane, Flers, France
Medals: British War Medal, Victory Medal