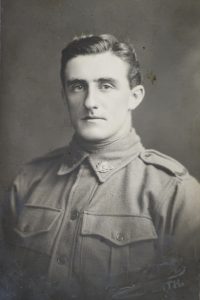 War Service: Joseph enlisted 15 Mar 1916, at Perth, WA, aged 25 years 3 months. He embarked per HMAT Ajana from Fremantle, WA 15 Jul 1916. He was taken on strength from the 11th Battalion 23 Sep 1916 to the 44th Battalion and proceeded overseas to France, 25 Nov 1916. Joseph was wounded in action 28 Feb 1917. Joseph was admitted to the Australian Casualty Clearing Station with a gunshot wound to the left knee. He was
sent from Boulogne, France to England per Hospital Ship St Andrew. From 02 to 17 Apr 1917 he was granted furlough to Hurdcott, England before being marched in from AIF Head Quarters 18 Apr 1917 and classified B1A2 (fit for overseas training camp in three to four weeks). It was another ten days before Joseph was classified B1A3 (fit for overseas training camp in two to three weeks). A month later, on 29 May 1917, Joseph proceeded to France and was marched in to Havre. On 19 Jun 1917, he rejoined his battalion and was appointed Lance Corporal 11 Jul 1917. He was promoted to Corporal, 24 Jul 1917. The battalion participated in the Third Battle of Ypres that lasted from 31 July to 06 November 1917. Also called the Battle of Passchendaele, infamous for the huge casualties on both sides and the terrible muddy conditions. In the eight weeks of fighting, Australian forces incurred 38,000 casualties.
Killed in Action: 02 Aug 1917, Belgium, aged 26 years. Joseph has no known grave.
Memorial: Menin Gate Memorial, Ypres, Belgium
Medals: British War Medal, Victory Medal