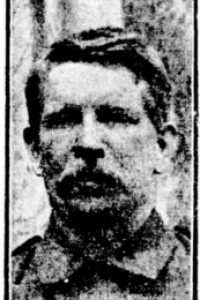 War Service: Arthur enlisted 23 Aug 1915 at Geraldton, WA, aged 40 years. He embarked 22 Dec 1915 per HMAT Ajana from Fremantle, WA. On 18 Feb 1916, he was admitted to 4th Auxiliary Hospital, Abbassia, Egypt with measles and discharged 06 Mar 1916. He was attached to 4th Training Battalion in Zeitoun, Egypt and from there, joined the British Expeditionary Force from Alexandria 01 Jun 1916. Eight days later, on 09 Jun 1916, Arthur
disembarked at Marseilles, France. The battalion, one of the original Gallipoli battalions, went into action on 08 Aug 1916 at the Battle of Mouquet Farm. They saw the beginning of the action between 08 to 12 August and the end between 29 to 31 August. The battalion lost 637 who were either killed, wounded or missing, virtually two-thirds of the battalion. Arthur was reported missing in action 31 Aug 1916. A court of inquiry was held 04 April 1917 to determine and confirm that Arthur Hayward was missing in action.
Killed in Action: 31 Aug 1916, at Mouquet Farm, Pozières, France, aged 41 years. Arthur has no known grave.
Memorial: Villers-Bretonneux Memorial, France
Medals: British War Medal, Victory Medal