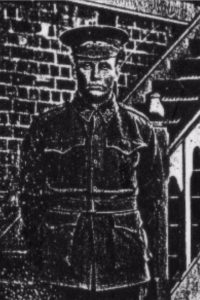 War Service: William enlisted 18 Jun 1917, Perth, WA, aged 32 years. He embarked per HMAT Medic from Sydney, NSW on 01 Aug 1917 and marched in to Codford, England 03 Oct 1917. A month later, 03 Nov 1917, he marched in from the 4th Training Battalion and proceeded to France 16 Jan 1918 to be taken on strength in the field 26 Jan 1918. The battalion took part in the great allied offensive of 1918, fighting near Amiens on 08 August. It was here William suffered a gunshot wound to the left shoulder and chest. It is reported he went up on the bank and came back and sat down, collapsing saying “I’m done”. He gave the witness his pay book and said: “I don’t think I’ll get over it”. The 13th Australian Field Ambulance took William and admitted him to the 20th Casualty Clearing Station, Vignacourt, France. He was evacuated to hospital by train but died on route and was offloaded to be buried at Vignacourt. The report from the Red Cross also reads: “He was dark, half-cast, and came over in the 26th or 27th Refts. to the 16th Battn”.
Died of Wounds: 10 Aug 1918 at Vignacourt, France, aged 33 years
Cemetery: Vignacourt British Cemetery, France
Military Connections: Brothers, 2927 Private John Maitland Holland, 51st Battalion, died of wounds 23 Sep 1917 and Private Frederick Holland 3940, Camel Corps, 15th Reinforcements, returned to Australia 04 Mar 1919.
Medals: British War Medal, Victory Medal