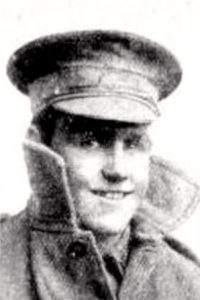 War Service: Leicester enlisted 31 Jul 1916 at Geraldton, WA, aged 20 years 4 months. He embarked 09 Nov 1916 per HMAT Argyllshire, from Fremantle, WA. Leicester committed an offence while on the troopship when he absented himself without permission after roll call on early morning parade 22 Dec 1916. He forfeited 1 days pay. He disembarked at Devonport, England 10 Jan 1917 and was admitted to Parkhouse hospital, Codford with mumps 27 Jan 1917. Leicester marched in from Sutton Veny hospital, Codford 15 Feb 1917 and because he overstayed his leave from midnight 04 Mar 1917, until reporting back at 2 pm 07 Mar 1917, he was awarded 3 days of No 2 field punishment with total forfeiture of 6 days pay. Leicester proceeded to Folkestone, France 09 Apr 1917 and marched out to his unit 05 May 1917. The 16th Battalion spent much of 1917 in Belgium advancing to the Hindenburg Line, serving in both the Battle of Bullecourt and in the Third Battle of Ypres (also called the Battle of Passchendaele). Leicester, a signaller, was out on an advanced post at Messines when he was shot in the head by a sniper while on observation duty and died instantly.
Killed in Action: 05 Aug 1917 at Gaspard near Messines Ridge, Belgium, aged 21 years.
Cemetery: Messines Ridge British Cemetery, Belgium
Medals: British War Medal, Victory Medal