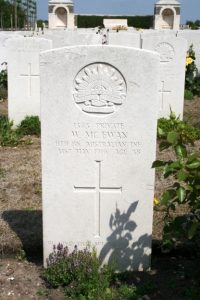 War Service: William enlisted with the Royal Scots Fusiliers in India 1895 and served 12 years. 8 years being in India. On 30 Oct 1914, he enlisted at Blackboy Hill, WA, aged 36 years 4 months and embarked per HMAT Itonus from Fremantle, WA, 22 Feb 1915. William was attached to the 11th Battalion, 3rd Infantry Brigade and detailed with the permanent beach party at Anzac Cove 23 Apr 1915. He was admitted to hospital on
Lemnos, 19 Nov 1915 with debility and was evacuated to base 08 Dec 1915. He disembarked per Tagus in Alexandria, Egypt and admitted to the Heliopolis hospital on 10 Dec 1915. On 23 Dec 1915, William was evacuated to the convalescent depot at Helouan, Egypt and by 28 Dec 1915 he was discharged to duty and joined base depot at Ghezireh, Egypt. He rejoined his battalion at Serapeum 06 Mar 1916 and embarked to join the British Expeditionary Forces in Alexandria 29 Mar 1916, disembarking at Marseilles, France, 05 Apr 1916. In May 1916 the battalion, after a period of acclimatisation and training, moved up to the front-line. On 30 May, the troops had their first experience of combat on the Western Front. In the fighting that followed, 37 men were killed, 70 wounded and 4 captured from the 11th Battalion. William was admitted to the 3rd Field
Ambulance during this action with gunshot wounds to his hand, right leg and a compound fracture to his left leg.
Died of Wounds: 31 May 1916 at Estaires, France, aged 38 years
Cemetery: Estaires Communal Cemetery and Extension
Medals: 1914-15 Star, British War Medal, Victory Medal

* After a long, comprehensive search of the name McErvin, as listed on the plinth and honour board, no record of any Australian soldier of this name was found. Believing it to be a transcription error, and looking at several possibilities, there is sufficient evidence to place William McEwan’s name on our list.