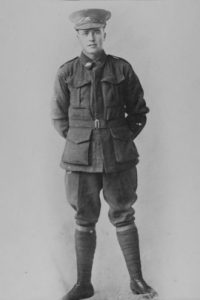 War Service: Michael and his younger brother William, enlisted 11 Jan 1916 at Blackboy Hill, WA. He was aged 29 years 3 months. They embarked on the 18 Jul 1916 per HMAT Seang Bee from Fremantle, WA and were marched in to the 4th Training Battalion, Rollestone, England 09 Sep 1916. They proceeded to France 14 Oct 1916, joining the 16th Battalion at Etaples, France 24 Oct 1916 and six days later the brothers were taken on strength in the field. Michael was admitted to hospital with a foot ulcer 06 Jan 1917 and was moved to the 5th General Hospital Rouen, France 14 Jan 1917. He was admitted to hospital twice with scabies at Etaples, during February 1917 and was not able to rejoin his battalion until 18 Mar 1917. The battalion went into action in April 1917 at the first Battle of Bullecourt. This action was badly planned and poorly supported, the Australians not receiving the planned tank support. In this battle, Australian losses were 3,500 casualties and 1,170 soldiers taken prisoner. Michael was reported missing in action and then was found to have been killed, while his brother was taken prisoner by the Germans.
Killed in Action: 11 Apr 1917 at Bullecourt, France, aged 31 years. Michael has no known grave. Three other soldiers, 3417 Charles Berry, 6483 Andrew Brunton and 5428 Arthur Sutton, from the Upper Chapman district, also died on this day.
Memorial: Villers-Bretonneux Memorial, France
Medals: British War Medal, Victory Medal