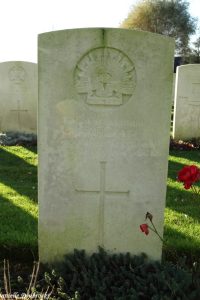 War Service: George enlisted 19 Oct 1914 at Guildford, Western Australia, aged 23 years 4 months. He embarked 08 Feb 1915 per HMAT Mashobra from Fremantle, WA and joined his unit at Anzac, Egypt, 02 Oct 1915. On Boxing Day, 26 Dec 1915 he disembarked in Alexandria, Egypt. George contracted mumps and was admitted to the 4th Auxiliary Hospital at Heliopolis, Egypt 19 Feb 1916. He returned to duty 05 Mar 1916 and was taken on strength with the 3rd Reserve Regiment. George was transferred to the 4th Division Artillery Column 01 Apr 1916 and 07 Apr 1916 was taken on as a mustered gunner at Serapeum, Egypt. He then transferred to the 24th Howitzer Brigade and was posted to the 110th Battery. On 03 Jun 1916, he joined the British Expeditionary Forces at Alexandria. The Brigade was sent to Marseilles, France 13 Jun 1916 when George was appointed driver. He was awarded 7 days No 2 Field Punishment 22 Oct 1916 for not complying with an order. On 25 Jan 1917, he was posted to the 38th Battery. He became sick with influenza in April and was sent to the 8th Field Ambulance, returning from hospital 10 Apr 1917. George had been promoted to a temporary Bombardier 15 Jul 1917, however, 24 Jul 1917, was reverted to Driver on evacuation to the New Zealand Stationary Hospital, Hazebrouck, France with synovitis of the knee. He had to be transferred to the 3rd Australian General Hospital, Abbeville, France and two weeks later, George was admitted to No 5 Convalescence Depot. By 11 Oct 1917 he was transferred to Base Depot and marched back in to Havre, France joining his brigade 07 Nov 1917. George was promoted to Bombardier to the Complete Establishment.
Killed in Action: 13 Jan 1918 at Spoilbank, France, aged 26 years. Intelligence reports state that the Battery was under harassing fire and Bombardier Neilson was killed at his post.
Cemetery: Perth Cemetery (China Wall), Zillebeke, Belgium
Medals: 1914-15 Star, British War Medal, Victory Medal