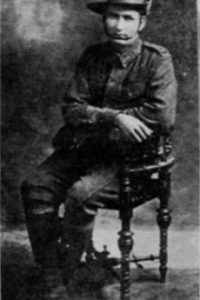 War Service: Frederick enlisted 02 Aug 1915 at Geraldton, WA, aged 19 years 11 months. On 13 Oct 1915, he embarked per HMAT Themistocles from Fremantle, WA and was taken on strength at Tel-el-Kebir, Egypt, 10 Jan 1916. On 16 Mar 1916, Frederick proceeded to join British Expeditionary Forces in Alexandria, Egypt and disembarked five days later in Marseilles, France. On 29 Jul 1916, Frederick was wounded in action and transferred to the 1st Field Ambulance with severe shrapnel wounds to the abdomen. On 30 Jul 1916, he was transferred to base hospital and the next day to the 13th General Hospital in Boulogne, France. On 03 Aug 1916, Frederick embarked for England per HS Cambria to be admitted to the County of London War hospital in Epsom. He was discharged two months later 09 Oct 1916 and granted furlough 11 to 27 Oct 1916. He returned to France per HT Princess Victoria on 31 Dec 1916, arriving in Etaples 03 Jan 1917. From 20 Jan to 27 Feb 1917 he was in Segregation until he was well enough to join his battalion on 07 Mar 1917. On 29 Mar 1917, Frederick was appointed Lance Corporal and was given a temporary promotion to Corporal on 06 May 1917. He attended the Divisional Bomb School, France, 12 to 16 May 1917 before rejoining his battalion. On 06 Aug 1917, he was promoted to Corporal and a temporary Sergeant. However, 20 Sep 1917, Frederick was wounded in action (2nd occurrence) in the preparatory action for the Battle of Polygon Wood, Belgium in which his brother lost his life. He was admitted to 5th Field Ambulance with a compound fracture of the skull and two days later was
transferred to the 17th Casualty Clearing Station.
Died of Wounds: 23 Sep 1917 at Polygon Wood, Zonnebeke Ridge, Belgium on the Western Front, aged 22 years. The boys’ father was the Postmaster at Nolba and he would have received the tragic telegrams within days of each other.
Cemetery: Lijssenthoek Military Cemetery, Lijssenthoek, Flanders, Belgium
Medals: 1914-15 Star, British War Medal, Victory Medal
Military Connections: Brother 2758, Private Francis William Pascoe; killed in action 26 Sep 1917 at the Battle of Polygon Wood.