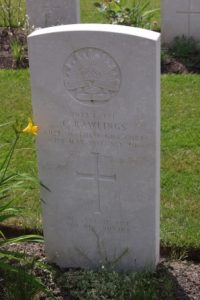 War Service: Charles enlisted at Geraldton, WA, 26 Jul 1915 aged 28 years 4 months. He embarked 05 Oct 1915 per HMAT Hororata from Fremantle, WA and was taken on strength to Ismailia, Egypt, 08 Jan 1916. On 07 Apr 1916, Charles transferred to the 4th Machine Gun Company at Serapeum, Egypt. On 01 Jun 1916, he proceeded to join the British Expeditionary Forces in Alexandria, Egypt, disembarking at Marseilles, France 10 Jun 1916. The Battle of Bullecourt on the Somme from April 1917, in which Charles was severely wounded, was a hastily planned attack that ended in disaster for the Australian troops involved. Planned supporting artillery cover for the advance was withheld due to poor communication and eventually the advancing troops were forced to retreat.
The AIF suffered 3,500 casualties and 1,170 Australians were taken prisoner by the Germans, the largest number ever in a single engagement during the war. Charles was one of those captured and taken prisoner.
Died of Wounds: 01 May 1917 whilst POW at Reserve Lazarett, Verden, Germany, aged 30 years
Cemetery: Hamburg Cemetery, Hamburg, Germany
Medals: 1914-15 Star, British War Medal, Victory Medal