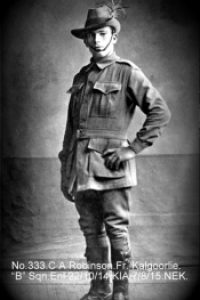 War Service: Charles enlisted 22 Oct 1914 at Guildford, WA, aged 29 years 7 months and embarked for Gallipoli, 08 Feb 1915 per HMAT Mashobra from Fremantle, WA. The regiment arrived at Gallipoli on 20 May 1915. They did not see action until 7 Aug 1915 which has become folklore for Australians, being the disastrous charge of the Turkish trenches at the Nek. It was meant as a diversion. Four waves of charges were sent at the Turkish entrenchments. All were cut to pieces. Charles Bean wrote: “The flower of the youth of Victoria and Western Australia fell at that attempt”. 234 Australians were killed, 138 wounded. Charles’ sister, Ethel Wishart, wrote: “I understand the 10th Light Horse with no more reinforcements, called for volunteers with the result that most were lost. My brother was shot dead through the head and arm”.
Killed in Action: 07 Aug 1915 at Walkers Ridge, Gallipoli, aged 30 years.
Cemetery: Ari Burnu Cemetery, Gallipoli Peninsula, Turkey
Medals: 1914-15 Star, British War Medal, Victory Medal