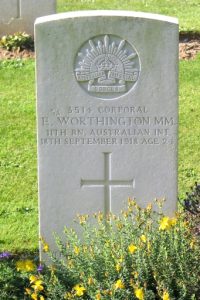 War Service: Enoch enlisted 11 Aug 1915, at Geraldton, WA, aged 21 years. He embarked per HMAT Ulysses from Fremantle, WA 02 Nov 1915. Soon after arrival, Enoch was admitted to the 4th Auxiliary Hospital Abbassia, Egypt with mumps and discharged to duty ten days later. He joined his battalion 02 Mar 1916. On 22 Mar 1916, Enoch left Alexandria to join the British Expeditionary Forces in Marseilles, France, arriving 03 Apr 1916. Between 22 and 25 Jul 1916, Enoch was wounded in action and admitted to the 44th Casualty Clearing Station with shell shock. He was transferred to the 1st Australian General Hospital at Rouen, France 26 Jul 1916 staying there for three days until he joined the base depot at Etaples 31 Jul 1916. He rejoined his battalion 25 Aug 1916. On 07 Jan 1917, Enoch was admitted to hospital with a blistered heel, which by 21 Jan 1917, had turned into trench feet. He was sent to England, per HS St Andrew and admitted to the 1st Southern General Hospital and discharged 01 Mar 1917. Enoch was awarded 3 days confinement to barracks and forfeited 2 days pay on 23 Mar 1917 for overstaying furlough from Tattoo. On 20 Jul 1917 he returned to France via Southampton and had rejoined his unit by 08 Aug 1917. On 26 Aug 1917, he was charged with being out of Division 1 area without a permit and not wearing an anti-gas appliance. For this offence, he was awarded 7 days forfeiture of pay. On 29 Sep 1917, Enoch was appointed Lance Corporal. He contracted scabies 12 Mar 1918 and was off duty for seven days before returning to his unit in France. He was promoted to Corporal 15 Aug 1918. The final action of the 11th Battalion in the war came on 18 Sep 1918 when the men launched an attack near Villeret. They advanced over 3,000 yards (2,700 metres) taking 120 prisoners. 18 men were killed, Enoch being one of them.
Killed in Action: 18 Sep 1918, Western Front, Tincourt, Somme, France, aged 24 years
Cemetery: Jeancourt Communal Cemetery Extension, Jeancourt, Picardy, France
Medals: Military Medal, 1914-1915 Star, British War Medal, Victory Medal
Military Honours: Near Chuignolles, France on the 23 Aug 1918, during our attack on Froissy Beacon, Cpl Worthington showed exceptional dash and gallantry, when his section came under heavy enemy machine gun fire he rushed forward, wounding and taking prisoner the enemy crew and capturing their gun, thus saving many lives in his company. Throughout the whole operation this NCO evinced great tenacity, coolness and able leadership; and rendered gallant service especially while in charge of a mopping up party, when he assisted in capturing 25 prisoners.
Military Connections: Brother, 1736, Private James Worthington, returned to Australia 08 Aug 1918. Father, 4524, Sapper George Worthington, returned to Australia 03 Mar 1919